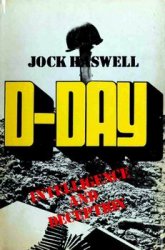 In D-Day: Intelligence and Deception, Jock Haswell provides a unique account of the intelligence work carried out on both sides of the English Channel during the period leading up to the D-Day landings. The book covers four main aspects of the story. The first, the operational aspect, concerns the problems of landing a huge invasion force on the beaches of a heavily-defended coast, by far the most difficult operation of war, and is discussed with reference to a selection of historical examples. The second, the intelligence aspect, deals with the collection and collation of information relating to both the preparation for attack and the defense of Eastern Europe. The third, the deception aspect, covers the immensely complex task of planting snippets of information and rumor in different parts of the world in order to build up a misleading picture of Allied plans in the mind of the enemy. The fourth aspect describes the actual result of the operation, and shows, in an account of the invasion, how far it was successful.