Eisenhower and Berlin, 1945: The Decision to Halt at the Elbe 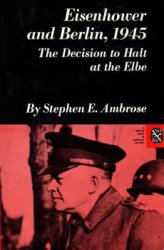 In the final months of World War II, with the Allied forces streaming into Germany on two fronts, a major decision had to be made; where to draw a stop line to prevent an accidental clash between the Russian and the Anglo-American armies. Behind this decision lay another. Which forces would be the first to reach Berlin?