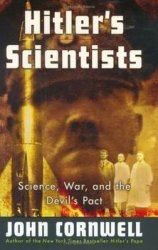 Nazi Germany had a head start in the science and technologies that dramatically transformed armed conflict in the twentieth century, leading to ultimate weapons of mass destruction, and the means of delivering them, ballistic missiles. John Cornwell's powerful history tells the story of Germany's scientists, from Hitler's rise to power in 1933 to his fall in 1945. He describes the behaviour of researchers in the huge span of scientific disciplines in which Germany excelled and led the world. Some were Nazi enthusiasts, many more were fellow travellers. Few resisted or rebelled and their efforts prolonged the war. Their failure to translate leading-edge expertise into military success is a crucial feature of world history. Their degenerate exploitation of death-camp victims and slave labour brought lasting shame on the entire German scientific community. Cornwell's disturbing book, however, raises questions about the conduct of all scientists whatever their nationality or ideology. Cornwell vividly describes how Adolf Hitler used and abused science to his own ends, borrowing from pseudo-biology to develop his murderous racist theories, seizing on rocket science and jet propulsion as desperate last bids to terrify his enemies and stave off defeat. He explores the German quest for an atomic bomb, resolving the intriguing story of Werner Heisenberg and his trip to Copenhagen: the final truth about the failure of Germany's nuclear research. Cornwell sets the genius and the eventual corruption of German scientists against the background of Germany's emergence as the technological powerhouse of Europe by the first decade of the century. In the final stages of his story he explores the record of scientists, East and West, since Hitler's fall. Have scientists behaved any better in the course of the Cold War and beyond?