The Devil's General The Life of Hyazinth Strachwitz, The Panzer Graf 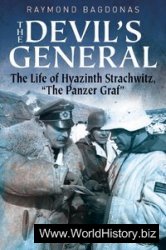 Author: Raymond Bagdonas
The Devil's General The Life of Hyazinth Strachwitz, The Panzer Graf
Casemate Publications
ISBN: 1612002226
2014
Format: EPUB
Size: 2,8 МБ
Language: English
This is the story of the most highly decorated German regimental commander of World War II, known as the “Panzer Graf” (Armored Count). An aristocratic Silesian, whose ancestors had faced the Mongols at Leipzig, Strachwitz first won the Iron Cross in the Great War. After fighting with the Freikorps and in between the wars, he was serving with the 1st Panzer Division when the Polish campaign inaugurated World War II.
Leading from the front, his exploits as commander of a panzer battalion earned him further decorations during the French campaign. Transferred to the newly formed 16th Panzer Division, he participated in the invasion of Yugoslavia and then Operation Barbarossa where he earned the Knight’s Cross. The following year, during the advance on Stalingrad, he won the Oak Leaves for destroying 270 Soviet tanks at Kalach. Now commander of a regiment, he reached the Volga and fought ferociously on the northern rim of Sixth Army’s perimeter. Severely wounded during the battles, he was flown out of the Stalingrad pocket and was thus spared the fate of the rest of Sixth Army.