Road to Valour A True Story of World War II Italy, the Nazis, and the Cyclist Who Inspired a Nation 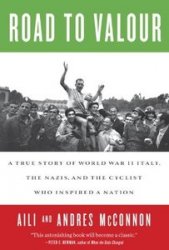 Author: Aili McConnon, Andres McConnon
Road to Valour A True Story of World War II Italy, the Nazis, and the Cyclist Who Inspired a Nation
Crown
ISBN: 0385669488
2012
Format: EPUB
Size: 5,3 МБ
Language: English
Pages: 336
Road to Valour is the inspiring, against-the-odds story of Gino Bartali, the cyclist who made the greatest comeback in Tour de France history and, between his Tour victories, secretly aided the Italian resistance during World War II.
Gino Bartali is best known as an Italian cycling legend: the man who not only won the Tour de France twice, but also holds the record for the longest time span between victories. During the ten years that separated his hard-won triumphs, his actions, both on and off the racecourse, ensured him a permanent place in Italian hearts and minds.
In Road to Valour, Aili and Andres McConnon chronicle Bartali’s journey, starting in impoverished rural Tuscany where a scrawny, mischievous boy painstakingly saves his money to buy a bicycle and before long, is racking up wins throughout the country. At the age of 24, he stuns the world by winning the Tour de France and becomes an international sports icon.