Luftwaffe: A Pictorial History of the German Air Force of WWII 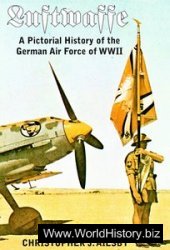 The Luftwaffe played an integral part in Hitler’s Blitzkrieg strategy in the early years of the Second World War, and in later years fought a valiant but ultimately hopeless campaign to prevent Allied aircraft bombing German factories and cities, and wreaking havoc on German forces on the ground. Luftwaffe is a stunning pictorial record of the Third Reich’s air arm from its establishment in the 1930’s to its war service between 1939 and 1945. With 400 black and white and coloured photographs together with drawings and paintings, the book tells the full, dramatic story of the German Air Force during the Second World War. This book also includes a brief look at the birth of flight from its inception to its coming of age in the First World War. A glimpse of the Luftwaffe first blooding with rare images of German military aircraft and personnel perfecting the art of Blitzkrieg while fighting for the Nationalists in the Spanish Civil War, just prior to the Second World War.