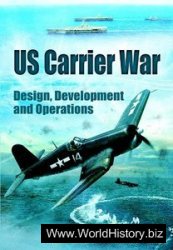 This book covers all aspects of the operations made by US aircraft carriers, from their introduction into service during WW1 to the continuing conflicts in the Middle East. America's part in WW1 saw the deployment of US Navy aircraft operating from coastal bases - mainly Curtiss flying boats. In the immediate postwar period the first aircraft carriers were commissioned; Langley, Saratoga and Lexington. After the wreckage had settled in the mud of Pearl Harbor, US Navy fighters engaged the Japanese for the first time at Wake Island. Japan continued its conquest of the Pacific countries and Islands throughout 1941. The USN then went on the offensive when two carriers attacked the Gilbert-Marshall Islands, and the Doolittle raid against Japan was launched from USS Hornet. During the Battle of Coral Sea the US Navy achieved a significant victory. Meanwhile in the Atlantic, US Carriers including Wasp and Ranger undertook escort duties across Atlantic. The latter also helped with the supply of Spitfires to Malta.