Typhoon, the Other Enemy: The Third Fleet and the Pacific Storm of December 1944 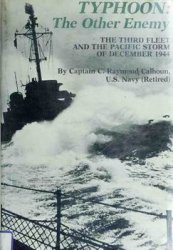 This is the story of the U.S. Third Fleet's battle with a devastating typhoon in the Philippine Sea on 18 December 1944. It is about men and ships under conditions of extreme adversity, and tells of their desperate, often heroic, sometimes tragic struggle to survive. The account describes the loss of seven hundred and ninety officers and men, three destroyers, and well over a hundred aircraft. It notes that two of the three ships lost were Farragut-class destroyers, long known to have low margins of stability. Included is an eyewitness account of the experience of the Dewey, a destroyer of the same class, which rolled to the limit of its capacity to recover—in the words of Hanson Baldwin, "perhaps the first vessel in the history of the sea to survive such a roll." 1 Some of these events raised questions about destroyer stability and the responsibility of the Bureau of Ships for destroyer design. This book addresses those questions.