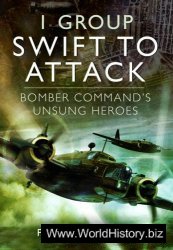 Following the recent unveiling of the monument to Bomber Command in London's Green Park, the publication of this lovingly crafted account of the exploits of oft-overlooked 1 Group is set to be a timely one. Patrick Otter combines an appropriate level of detail regarding operations, aircraft, bases and incidents, with accounts of human endurance and squadron fraternity, which works to create a thoroughly well researched account of the wartime proceedings of 1 Group which is rooted firmly in humanity. The book is heavily illustrated throughout with both images of aircraft and pilot profiles, supplementing the text perfectly and working further to humanize the accounts which the author relays, as well as satisfying the Aviation buffs curiosity for new and interesting images of aircraft in their wartime contexts. Although often considered a somewhat controversial operational unit, the bravery of the men who made up Bomber Command has never been in question. This book is further testament to that fact.