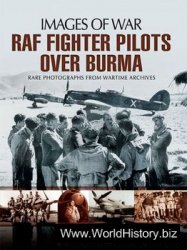 It is a recognized fact that, had the war gone badly for the Allies on the India/Burma front, and had the Japanese succeeded in invading the Indian Continent, the outcome of the war would have been entirely different. Yet despite this, the campaign on the Burma front is offered surprisingly scant coverage in the majority of photo-history books. This new book, from respected military historian and author Norman Franks, attempts to redress the balance, noting the importance of this particular aerial conflict within the wider context of the Second World War.