Victory Fighters: The Veterans' Story, Winning The Battle For Supremacy In The Skies Over Western Europe, 1941-1945 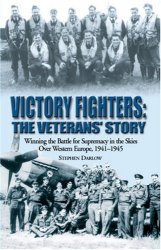 Victory Fighters is largely a collection of eye-witness accounts of the struggle that raged in the skies over occupied Europe after the Battle of Britain. Expertly selected and inter-woven by Stephen Darlow, the book centres on the stories of six pilots and one navigator, the telling of which covers every aspect of this battle over land and sea. The author describes and analyses the relevant command decisions from the highest level down and against this background the men give their accounts from the start of their flying careers through to the preparations for operation Overlord, the invasion itself, the liberation of France, the crossing of the Rhine, to the end of the war in Europe on VE-Day. Through their eyes, the reader is introduced to a series of different tasks and situations, a multitude of aircraft types - Sunderlands, Mustangs, Tempests, Typhoons, Spitfires, Whirlwinds, Mosquitoes - and a great many squadrons. Through interviews and diligent research of documents, diaries and correspondence, the author has produced a fitting testament to these men and the countless others they represent.