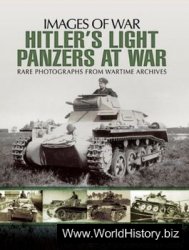 Hitler’s Light Panzers at War is a highly illustrated record of the German light tank from its beginnings in the 1930s to the key battles it fought in Poland, France, North Africa, Russia and North Western Europe. The book analyzes the development of the light Panzer, which ranged from the Panzer I, II and the Czech build Panzer 35 & 38t. It describes how the Germans carefully utilized the development of these light machines for war, and depicts how these tanks were adapted and up-gunned to face the ever-increasing enemy threat.