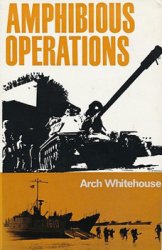 Every major offensive launched by the U.S. during WW II was initiated by an amphibious assault, which fact has led many to believe that amphibious warfare is relatively new development, when in reality it is as old as recorded history. Arch Whitehouse, whose 16 previous books cover practically every aspect of modern warfare, does not begin quite that far back in his story here; he is content to start out with ulius Caesar's invasion of Britain. The remaining chapters deal with sea-to-land assaults at Louisburg and Quebec, during the American Revolution, at Gallipoli and eebrugge in WW I, every major beachhead in all theatres of WW II (four chapters), the Inchon landing during the Korean Police Action, and present-day American amphibious equipment and forces, as seen first-hand by the author in a full-scale exercise that was staged off the island of Vieques in the Caribbean recently.