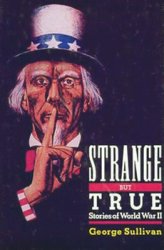 Accounts of eleven bizarre but true incidents during World War II include a secret alliance between the U.S. Navy and the Mafia and Japanese bombing by balloon of our Midwest. Only seven months before their surrender at the end of World War II, the Japanese launched a bombing attack on the United States. Thousands of bombs attached to high altitude balloons penetrated and exploded as far inland from California as Iowa and Kansas. A full account of how the American government minimized the effects of these Japanese "windship weapons" is only one of several strange and little-known World War II stories told in this book.