The Crushing of Poland (Images of War) 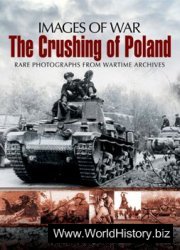 Hitler's decision to invade Poland in August 1939 triggered the start of the Second World War. It was also the first demonstration of Blitzkrieg tactics - the ruthless use of armor, mobile infantry and air support. The brave Polish army, inadequately equipped and inferior in numbers, was overwhelmed by this awesome display of military power as well as being taken by surprise. Official German photographers accompanied the triumphant Nazi forces on their victorious advance which first seized the key part of Danzig and then Warsaw, all within one month. The Crushing of Poland captures the drama and raw aggression of the Campaign in photographs and full captions.