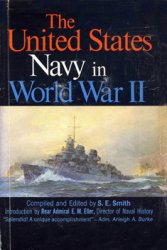 In assembling the book, Smith excerpted whole chapters from some of the best books written about the navy's exploits during the Second World War. All of the collected chapters, written by one-hundred authors, were taken from books that told the navy's history through the simple telling of a story. There is no dry analysis of tactics here. You will see the intensity and drama unfolding aboard the ships at Pearl Harbor as the Japanese attacked . . . or watch from the bow of the destroyer Borie's as she rammed a Nazi U-boat in the middle of the Atlantic . . . or stand on the flight deck of the Guadalcanal as she chases down U-505 . . . or feel the Lexington as she started to list in the Coral Sea . . . and on and on it goes. Everything is here. The Aaron Ward. The Argus. The Bunker Hill. The Indianapolis. PT 109. And of course, the Enterprise and the Yorktown.