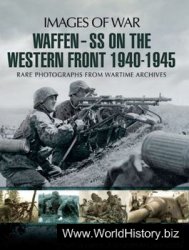 This book in the popular Images of War series covers the deeds of the Waffen-SS on the Western Front during the Second World War. With extensive text and in-depth captions with many rare and unpublished photographs, it describes the fighting tactics, the uniforms, the battles and the different elements that went into making the Waffen-SS such an elite fighting unit. It traces how the Waffen-SS carefully built up their assault forces utilizing all available reserves and resources into a ruthlessly effective killing machine.