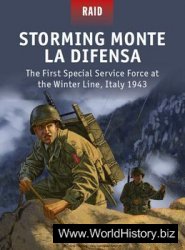 
In December 1943 Monte La Difensa was part of the formidable German defences overlooking the Allies' planned route to Rome via Monte Cassino. In the First Special Service Force's first combat in the Mediterranean theater, the Force would employ its special training in mountain and winter warfare to scale the peak, capture it, and then hold it against the inevitable German counterattacks. Astonishing their superiors, the First Special Service Force succeeded in the face of seemingly impossible odds, but suffered a 77 percent casualty rate. Their victory, founded on their aggressive doctrine and extensive training in a variety of combat techniques, would prove instrumental in the postwar development of special forces. Employing full-colour artwork, archive photographs, and first-hand accounts from participants, the author examines the origins, execution, and aftermath of the FSSF's spectacular success at Monte La Difensa amid the savage winter conditions of December 1943.