Hitler's Mistakes: New Insights Into What Made Hitler Tick 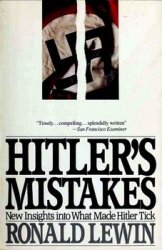 This thought-provoking book is the last work of Ronald Lewin, one of England's most distinguished military historians. Lewin was fascinated with the complexities of Hitler's character and what made the Nazi leader tick. What were Hitler's shortcomings as a political leader, as a military commander, and as a man? In this book Lewin displays a sure grasp of the complicated makeup of one of the greatest evil geniuses of our time. Based on an impressive and wide-ranging study of many sources unfamiliar to the general reader, Hitler's Mistakes is an eminently readable and important work of history.