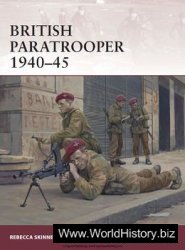 Inspired by the exploits of the German Fallschirmjäger in the blitzkrieg campaigns, Winston Churchill called for the formation of a 5,000-strong Airborne Force in June 1940. From these beginnings The Parachute Regiment became one of the foremost units of the British Army both in World War II and up to the present day. This new history of the British Paratrooper, from 1940 to 1945, details the unique training, weapons and equipment used by these elite troops. A wealth of first-hand and until now unpublished materials brings the history of the ordinary paratrooper to life, drawing on the author's position as a former curator of the Regimental Museum.