Men Against Tanks: A History of Anti-Tank Warfare 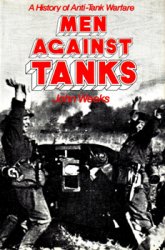 A history of tank warfare since 1917. This is a nuts and bolts tale about the development of anti tank guns. Sometimes the military's motto was the best anti tank weapon was a tank. Many times the courage of the men operating the anti tank weapon was stronger than the device itself. You might think from the countless designs that were tried and the endless copying of previous ideas that seemed to work, that something like the bazooka would have been a snap. During WWII the bazooka project had two officers from the army and a college professor working on it with no budget. The original bazooka had been successfully tested during WWI but the army had forgotten about it. In 1942 it had no priority and for it's debut it was an unannounced last minute addition to the list of anti tank weapons to be tried out that day. It was promptly put into mass production.