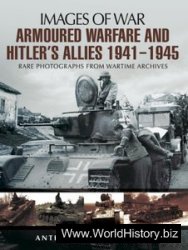 German, American and British tanks come to mind first whenever the military vehicles of the Second World War are considered – they get all the historical attention. The tanks, self-propelled guns and armored cars built and deployed by the secondary nations in the conflict, in particular by Hitler’s Axis allies, have been almost forgotten. The rarity of these armored fighting vehicles makes them especially interesting, and that is why Anthony Tucker-Jones’s photographic history is of such value. His selection of previously unpublished wartime photographs provides a visual record of the armored forces thrown into action by Hitler’s allies on the Eastern Front from 1941 to 1945. Illustrated here are the panzers deployed by Bulgaria, Finland, Slovakia, Hungary, Italy and Romania on the Eastern Front and in the Balkans. Hungary’s homemade armor included the Toldi and Turán tanks and Zrínyi self-propelled guns. The Italians produced CV-33 tankettes, Semovente self-propelled guns, Autoblinda and Lancia armored cars and a series of tanks. Romanian and Czech tanks and assault guns were also deployed. Anthony Tucker-Jones’s photographic survey of these little known and underrated military vehicles will be fascinating reading, and a useful source of reference, for everyone who is interested in the history of armored and mechanized warfare.