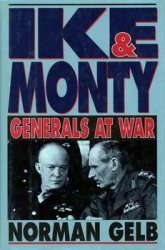 Fifty years after the momentous Allied invasion of Normandy, here is a fascinating and sweeping dual portrait of the deeply troubled collaboration between two of history's greatest military leaders. Ike and Monty is the first book to focus exclusively on how their relationship determined the fate of the Allied effort to liberate Europe in World War II. It is a compelling account of the roles played in the struggle against Nazi Germany by Dwight David Eisenhower, the Supreme Allied Commander, and Bernard Law Montgomery, the most celebrated British battlefield commander of modern times.