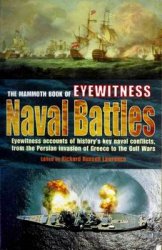 This mammoth volume offers first-hand accounts by the officers and crew who manned the galleys, sailing ships, ironclads, dreadnoughts, submarines, and flat tops in the world’s most famous battles at sea. With illustrations, diagrams, maps, and drama, these pieces record the tactics, setbacks, perils, defeats, and victories that have etched in our memory the names of naval heroes like John Paul Jones, who fathered the American navy; the gloriously celebrated Vice Admiral Horatio Nelson who proved that Britannia ruled the waves; “the sea wolf” Thomas Cochrane ; Captain Isaac Hull, the commander of “Old Ironsides”; David Farragut, who famously took the Union navy to victory in Mobile Bay during the American Civil War; and Commodore George Dewey, who effectively defeated the Spanish fleet in the 1898 Battle of Manila Bay. Eyewitness testimony records unforgettable moments in some of the most crucial encounters at sea during the twentieth century, most epically in the Pacific theater of World War II—at Guadalcanal, in the Battle of Midway, and momentously in the D-day landings at Normandy. Throughout, this exciting volume brings three millennia of naval history to life.