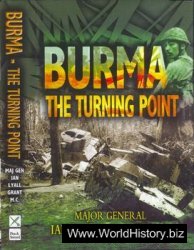 The turning point of the war in Burma was the Imphal/Kohima campaign of 1944. For four months there was intense and savage fighting. The Japanese plan was to encircle and destroy the British and Indian positions before bursting into the plain and seizing Imphal. They failed in their first aim but the Japanese 15th Army prepared a final all-out thrust for Imphal. However, the British 4th Corps struck first and, after three weeks, the Japanese were virtually annihilated. This graphic account expertly analyses the campaign.