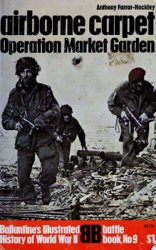 This is another nicely readable look at World War II military campaigns and tactics from Ballantine Classics. Here readers learn about Airborne troops, and specifically the Allies bold but failed operation in Operation Market Garden (¨A Bridge too Far¨) in the Netherlands and Germany in September, 1944. Readers learn about training and tactics, and why this bold gambit to flank the Wehrmacht and cross the Rhine asked more of the troops than could be accomplished. As we see in both prose and photos, the airborne troops easily captured and held two bridges but lacking support, could not hold the third for very long against harsh counter-attack. Meanwhile the Allied spearheads were unable to break through to save them. This is a solid, readable, informative look.