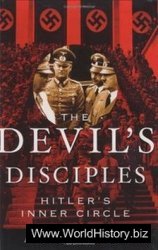 The Nazi regime was essentially a religious cult relying on the hypnotic personality of Adolf Hitler, and it was fated to die with him. But while it lasted, his closest lieutenants competed feriously for power and position as his chosen successor. This peculiar leadership dynamic resulted in millions of deaths and some of the worst excesses of World War II. This book examines these lieutenants, both as individuals and as a group. It focuses on the three most important Nazi paladins - Goring, Goebbels and Himmler - with their nearest rivals - Bormann, Speer and Ribbentrop - in close attendance. It shows how these personalities developed, and how their constant jealousies and intrigues affected the regime, the war and Hitler himself.