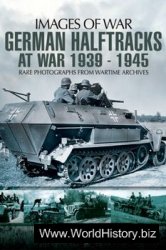 In the aftermath of The Great War, which saw the introduction of the tank, the more far sighted military leaders realized that the future of warfare hinged on a balance of mobility, firepower and protection.Tanks would need to be accompanied into battle by supporting arms, specifically infantry, artillery and engineers. An all fully-tracked field army was thought to be too expensive, so the semi-tracked support vehicle (commonly called a halftrack) was born. The halftrack concept was embraced by the French, the US and most notably Germany.