The USA in World War 2: The European Theater 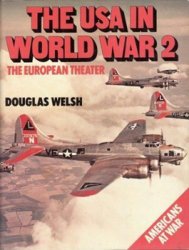 The European Theater of World War II, also known as the European War, was a huge area of heavy fighting across Europe from Germany's invasion of Poland on September 1, 1939 until the end of the war with the German unconditional surrender on May 8, 1945 (V-E Day). The Allied forces fought the Axis powers on two fronts (the Eastern Front and Western Front) as well as in the adjoining Mediterranean and Middle East Theater.