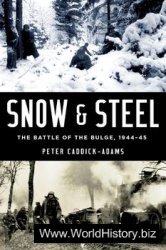 Between December 16, 1944 and January 15, 1945, American forces found themselves entrenched in the heavily forested Ardennes region of Belgium, France, and Luxembourg defending against an advancing German army amid freezing temperatures, deep snow, and dense fog. Operation Herbstnebel--Autumn Mist--was a massive German counter-offensive that stunned the Allies in its scope and intensity. In the end, the 40-day long Battle of the Bulge, as it has come to be called, was the bloodiest battle fought by U.S. forces in World War II, and indeed the largest land battle in American history. Before effectively halting the German advance, some 89,000 of the 610,000 American servicemen committed to the campaign had become casualties, including 19,000 killed.