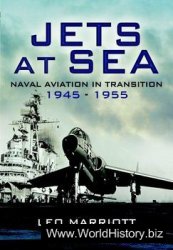 As World War Two drew to a close, jet-powered aircraft were beginning to be introduced into service. To take advantage of this major development it was necessary for all the world's air powers to rethink combat tactics and develop the means of handling these faster and generally larger aircraft in the air, on land and especially at sea. As this modern breed approached and finally broke the sound barrier, so did landing and takeoff speeds. The decade after the war saw rapid developments in the design of both naval aircraft and their seaborne bases - the aircraft carrier.