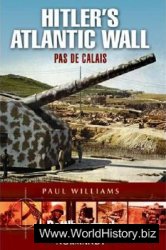 This well-illustrated book describes the massive effort that the occupying Nazi forces put into the construction of the Eastern section of the Atlantic Wall. While the D-Day invasion was unaffected by the fortifications in this area, they still posed a significant threat. This came from the mighty gun batteries (such as Batteries Todt and Lindemann) that threatened Channel shipping and the South Coast of England, and, while isolated from the main Allied advance, the Festung ports of Calais, Boulogne and Dunkirk were denied to Allied use. This was of major strategic significance as the lines of supply were becoming ever longer and more vulnerable.Using rare archive material, this book takes the reader on a fascinating journey along the coast that Hitler was wrongly convinced would be the site of the Allied landings. Hitler's Atlantic Wall - Pas de Calais tells the history of how and why the giant batteries were built, the origins of their weaponry and the ingenious engineering and military operations that defeated them finally.