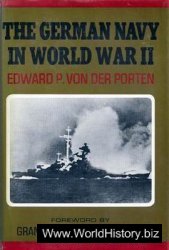 The book The German Navy in World War II by Edward P. Von der Porten presents in its broad view an accurate, clear, and vivid picture of German naval strategy. The political and the military leadership of Germany—reared in continental concepts, and caught in them—did not recognize the decisive importance of the naval war to grand strategy. This lack of understanding was one of the fundamental reasons for the political and strategic errors committed by the German state and war commands.