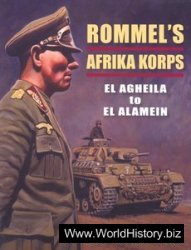 Author: George Bradford
Rommel's Afrika Korps - El Agheila to El Alamein
Stackpole Books
ISBN: 081170419X
2008
Format: PDF
Size: 78,3 МБ
Language: English
Pages: 214
In the sands of the Western Desert in 1941-42, Erwin Rommel made history as the Desert Fox, waging a brilliant and bold campaign against the British. Beginning at El Agheila in March 1941, the Afrika Korps--frequently outnumbered--drove the British steadily east across Libya and into Egypt. The German offensive eventually ground to a halt in a series of battles at El Alamein. In impressive detail, George Bradford depicts what it was like to serve and fight in the Afrika Korps, from its tanks and equipment to its battles and daily life