The Nazis Next Door: How America Became a Safe Haven for Hitler's Men 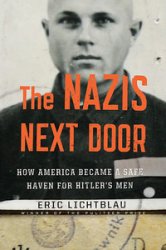 Author: Eric Lichtblau
The Nazis Next Door: How America Became a Safe Haven for Hitler's Men
Houghton Mifflin Harcourt
ISBN: 0547669194
2014
Format: MOBI
Size: 11,9 МБ
Language: English
Pages: 288
"The Nazis Next Door: How America Became a Safe Haven for Hitler's Men" by Eric Lichtblau exposes the truth about the Nazis who were welcomed into the United States and given safe harbor. I knew that some Nazis were brought to the United States because of the valuable information and knowledge they had in science, medicine, military, engineering, and so on. As I read this book I found that there were many, many more who were given admittance to the United States to weave their way into the tapestry of the US population and basically disappear. They found a safe place to hide in plain sight. Regardless of the unthinkable war crimes these Nazis committed, the FBI and CIA turned a blind eye to their crimes.
This book is very well researched and written. It's not one of those books filled with facts that are great to know but the reading so dry you lose interest. This is a book that held my interest from the first page to the last. It's a book that left me feeling very unsettled and even more distrusting of our government, the CIA, and FBI.