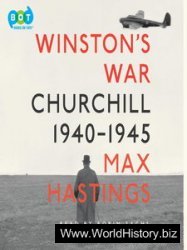 Author: Max Hastings
Winston's War: Churchill, 1940-1945
Vintage
ISBN: 9780307388711
2011
Format: EPUB
Size: 11,8 МБ
Language: English
Pages: 608
Winston’s War is a vivid and incisive portrait of Winston Churchill during wartime. Here are the glories and triumphs, the contradictions and blunders of the man who, through sheer force of will, kept Britain fighting in 1940. But as the tide of the war turned, historian Max Hastings shows how Churchill was often disappointed by the failure of the British Army to match his hopes on the battlefield, and by the difficulties of sustaining the wartime alliance not only with the Soviet Union, but also with the United States. With surprises on almost every page, Winston’s War is a riveting profile of one of the greatest leaders of the twentieth century.