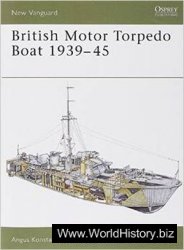 British Motor Torpedo Boat 1939-45 (New Vanguard 74)
Author: Angus Konstam, Tony Bryan
Osprey Publishing
ISBN: 1841765007
2003
Pages: 51
Format: PDF
Size: 12.6МБ
Language: English
During the Second World War, flotillas of the Royal Navy's Motor Torpedo Boats and other coastal forces fought a deadly war for control of the English Channel and the North Sea. These small, fast boats attacked enemy convoys, escorted freighters, landed secret agents and even raided enemy ports. Unsung heroes, these craft and their tiny crews helped stave off defeat in the dark days of 1940. The same vessels then took the fight to other waters, and by the end of the war, British MTB's had seen service in the Mediterranean, the Baltic and the Far East. This book examines the development and operation of these frail, sleek little warships, and describes the way they were manned and how they fought.