The Ideological Origins of Nazi Imperialism 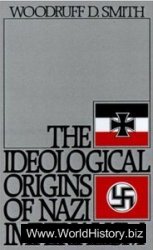 Author: Woodruff D. Smith
The Ideological Origins of Nazi Imperialism
Oxford University Press
ISBN: 0195036905
1986
Format: PDF
Size: 22,8 МБ
Language: English
Pages: 352
This study traces the evolution of imperialist ideology in Germany from Bismarck in the mid-19th century through Hitler and the Third Reich. Although much has been written about the virulently racist and anti-communist ideologies of the Nazi party, this is the first book to treat Nazi imperialism as a separate ideology and set it within a sturdy theoretical framework. Smith contends that Nazi imperialism represented the last, ambitious attempt to integrate two century-old ideologies--the elite, pro-industrial Weltpolitik and the popular-based, pro-agrarian Lebensraum--into a single system. In fact, Smith argues that it was largely the way in which the Nazis attempted to reconcile these contradictory ideologies that explains Germany's disastrous policies during World War II. This wide-ranging study also contributes to the debates over several other aspects of German history, including German military aims in World War II, the continuity--or discontinuity--of German policy from Bismarck to Hitler, and the relation between ideology and social-political life.