No Victory in Valhalla: The untold story of Third Battalion 506 Parachute Infantry Regiment from Bastogne to Berchtesgad 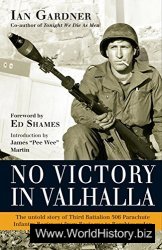 Based on extensive interviews with the survivng veterans, No Victory in Valhalla relives the dramatic struggle of the famed "Screaming Eagles" paratroopers in some of the toughest fighting of World War II. Famously profiled in Band of Brothers, the division as a whole was awarded Unit Citation for its heroic defense of Bastogne - a first in the history of the US armed forces.

It's late November 1944, after 71 days fighting in Holland, and the 506th Parachute Infantry are withdrawn having suffered heavily during Operation Market-Garden, and are looking forward to three months R&R. However, this is not to be. On December 16, 1944, the Germans launched the offensive which came to be known as the Battle of the Bulge and the 101st Airborne Division was rushed into action to stem the German tide. The ensuing large-scale combat operation would write the most dramatic chapter in the history of the 506th Parachute Infantry Regiment and Third Battalion in particular. Bitter fighting in unbearable conditions saw the battalion reduced to the size of a company before its relief on January 17.

Following this the battalion took part in the reduction of the Colmar Pocket, the Ruhr Pocket, and the liberation of the concentration camps in Germany itself, with Ed Shames being the first Allied soldier to cross the gates of Dachau. The Third Battalion finished the war occupying Hitler's mountain retreat of Berchtesgarden, held on readiness for deployment to the Pacific until Hiroshima and Nagasaki precipitated the Japanese surrender.

This book is the final book in a gripping trilogy which includes Tonight We Die as Men and Deliver us from Darkness.