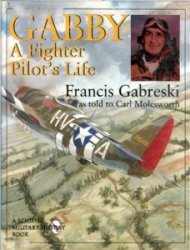 Author: Francis Gabreski
Schiffer Military History - Gabby. A Figter Pilot's Life
Schiffer Publishing
ISBN: 0764304429
1998
Format: PDF
Size: 132,7 МБ
Language: English
Pages: 176
Gabreski was a top American ace in both WW II and Korea: in the European theater he downed a record 28 aircraft, and in Korea scored six kills. His accomplishments were perhaps astonishing because he came close to washing out in flight training. But his career had some other unusual twists as well. Son of Polish immigrants, Gabreski flew with a Polish squadron of the RAF before he joined the U.S. Air Force and, on the day he was to fly home after 166 missions, he was shot down and captured. He left the Air Force in 1967 and worked in the aircraft industry until 1978, when he became president of the Long Island Rail Road. He retired in 1987. His autobiography is a tale of high adventure and, with an assist from Molesworth, editor of the Skagit Valley Herald in Washington, he tells it with a matter-of-factness that heightens the impact. Photos not seen by PW.
Copyright 1991 Reed Business Information, Inc. --This text refers to an out of print or unavailable edition of this title.