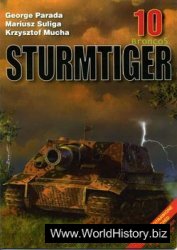 During World War II, Germany produced a variety of specialized armored fighting vehicles, including Sturmpanzers - assault tanks. They were to be used as heavy infantry support vehicles in urban street warfare against buildings and in operations against heavily fortified defenses. The first was the Sturminfanteriegeschiitz 33 based on the Panzerkampfwagen III medium tank and armed with the 150mm sIG heavy infantry gun. All 24 built were produced in 1942 and saw service on the Eastern Front, including Stalingrad. The Sturminfanteriegeschiitz 33 was followed by the Sturmpanzer IV Brummbar, which was based on the Panzerkampfwagen IV medium tank and armed with a 150mm StuH (Sturmhaubitze) assault/attack howitzer.