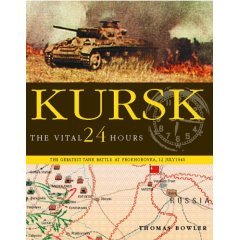 Author: Will Fowler
Kursk - The Vital 24hrs
Amber
ISBN: 1904687369
2005
Format: PDF
Size: 70,2 МБ
Language: English
Pages: 192
In the early summer of 1942, following the German defeat at Stalingrad and the inconclusive battle at Kharkov, Hitler sought a decisive battle that would turn the struggle on the Eastern Front in the German's favour. Large numbers of the newly-designed Panther and Tiger tanks were rolling off the production lines, and Hitler was convinced that, with appropriate numbers, German armour could turn the tide against the advancing Soviets on the Eastern Front. Despite the reservations of his leading generals, Hitler was determined this offensive take place.
On the 5th July 1943, the German army launched Operation Citadel. Attacking with a force of 3000 tanks and assault guns, the Germans faced a well-dug in force of more than 3900 Soviet tanks, with another 1500 tanks in reserve. The tanks advanced with as many as 50 packed together per kilometre of line. What followed was the largest tank battle the world has ever seen, with heavy casualties on both sides in this titanic clash of arms.
On the 11th July, three SS divisions - Totenkopf, Das Reich and Liebstandarte - attempted to break through the Soviet lines at the village of Prokhorovka and so unhinge the Soviet defensive position. Facing them were newly deployed Fifth Guards Tanks Army. The battle raged all day, with German attack followed by Soviet counterattack. By nightfall the Germans had lost more than 300 tanks and the Fifth Guards Tanks Army 50 percent of their strength. Despite the heavy losses, the Soviet defenders had achieved their aim: the German attack had been halted and the initiative lost.