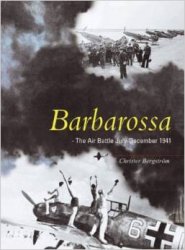 Author: Christer Bergstrom
Barbarossa: The Air Battle July-December 1941
Midland Publishing
ISBN: 1857802705
2007
Format: Djvu
Size: 5,0 МБ
Language: English
Pages: 144
This book, written by a recognised authority on the air war over the Eastern Front, provides an informed, detailed and balanced account of the massive aerial campaign fought in the skies over the Soviet Union following the launch of Operation Barbarossa. Unlike most recent histories, this account features newly discovered information from both Russian and German sources and significantly expands the author's earlier study of this campaign. There is also much unique eye-witness material, and the text will be accompanied by a large number of rare and previously unpublished photographs, biographical studies of major players in the conflict, data tables, technical assessments and appendices.