Inside the Third Reich 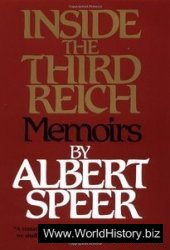 Author: Albert Speer
Inside the Third Reich
Simon & Schuster
ISBN: 0684829495
1997
Format: PDF
Size: 33,9 МБ
Language: English
Pages: 672
From 1946 to 1966, while serving the prison sentence handed down from the Nuremburg War Crimes tribunal, Albert Speer penned 1,200 manuscript pages of personal memoirs. Titled Erinnerungen ("Recollections") upon their 1969 publication in German, Speer's critically acclaimed personal history was translated into English and published one year later as Inside the Third Reich. Long after their initial publication, Speer's memoir continues to provide one of the most detailed and fascinating portrayals of life within Hitler's inner circles, the rise and fall of the third German empire, and of Hitler himself.
Speer chronicles his entire life, but the majority of Inside the Third Reich focuses on the years between 1933 and 1945, when Speer figured prominently in Hitler's government and the German war effort as Inspector General of Buildings for the Renovation of the Federal Capital and later as Minister of Arms and Munitions. Speer's recollections of both duties foreground the impossibility of reconciling Hitler's idealistic, imperialistic ambitions with both architectural and military reality. Throughout, Inside the Third Reich remains true to its author's intentions. With compelling insight, Speer reveals many of the "premises which almost inevitably led to the disasters" of the Third Reich as well as "what comes from one man's holding unrestricted power in his hands."