Flying Army - the Modern Air Arm of the US Army 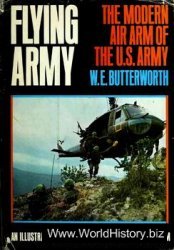 In an age of increasing complexity and specialization in the techniques of war, it is a strange fact of our military establishment that there are more pilots serving in the U. S. Army than in the Air Force. For as this colorful volume makes clear, the modern Army has carefully kept pace with the innovations that flight introduced to warfare and adopted them to its own needs and requirements. Flying Army traces the evolution of Army aviation from its roots in Thaddeus Lowe's Civil War observation balloon, through its first tottering steps with artillery spotting and Bason aircraft in World War II, and on to today's highly mobile Airborne Infantrymen and Air Cavalry units that have all but replaced the foot soldier of the past.