The Russian Navy - Myth and Reality 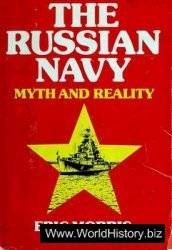 The modern Russian Navy has come a long way since its humiliating defeat at the hands of Admiral Togo at the Battle of Tsushima during the Russo-Japanese war. Although its naval history dates back to Peter the Great, Russia achieved little at sea in the first half of this century. The maritime role was subordinated by doctrine and circumstances to the needs of land warfare. Since 1945 the Russian navy has become an increasingly important instrument of Soviet foreign policy. Eric Morris examines this development and shows how Russia, in her dealings with the United States and other powers, has evolved a relationship which has moved away from the propaganda and confrontation of the 1950s to a more subtle policy of detente. Behind this, however, lies the ominous strategy of "sea denial" propagated by Admiral Sergei Gorshkov, the flamboyant naval Commander in Chief, which points to Soviet pretensions to mastering the oceans of the world. Manifesting this intent, Russian ships have become increasingly evident. This new Russian maritime policy is analyzed in this illuminating—and at times disturbing— book.