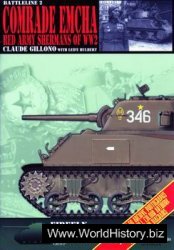 The use of Allied armor in Soviet service is well known, but not always that well documented. Like the last book from Oliver Publishing that I reviewed, this one is mostly a picture book, with some images taking the full paged. Within its 34 A4 size pages is a brief history of the tank in Soviet service including the difficulty of researching the subject and the type of Shermans that were offered. There is also a section on some of the major units that operated the tank as well as use of the tank in some campaigns. But it is the images that are the main draw. Each image has a rather extensive caption that not only describes the image, but provides a bit of background on it as well. The selections are well made and many of the tanks so photographed are included in the several pages of full color profiles. As these tanks were rarely in any camouflage other than Olive Drab, many of the profiles limit themselves to the turret, which is just fine.