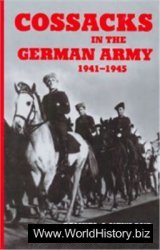 The Cossacks who wore German uniforms saw their service not as treason to the motherland, but as an episode in the revolution of 1917, part of an ongoing struggle against Moscow and against Communism. Their reward was forced repatriation into Stalin's Gulag at the hands of Western powers in 1945.
Using a wide variety of resources, this book provides a detailed examination of the background of German - or more specifically Nazi - attitudes toward the Soviet peoples. With this background established, the contradictory and amoral policy of National Socialism toward the eastern volunteers is examined, culminating in a study of German attitudes and policies toward the Cossacks. The book then traces the recruitment, training and commitment to battle of the Cossack Division, and its later enlargement into the 15th Cossack Cavalry Corps in 1945.
This is the first history of Cossack troops in German service in the English language. It is to be hoped that it will provide the impetus for more research on this topic, as well as on the other Soviet nationalities in German service.

Contents:
Barbarossa: its Origins and Successes.
Exceptions to the Rule.
Who Can Wear the Field Grey?
The Cossacks: the Tsar’s Praetorian Force.
The De-Slavization of the Cossacks.
Mielau: Organization and Training.
Self-Government for Soviet Nationalities - a Wehrmacht initiative.
Who Leads the Cossacks? Who Champions their Cause?
The Cossack Division in Combat.
Requiem for the Cossack Corps.
Appendices.