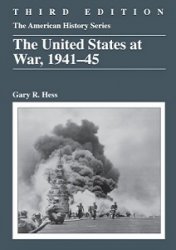 
This 3rd edition presents a concise overview of how the war was fought as well as a consideration of the ways in which Americans regarded allies and enemies, embraced heroes, and viewed the war's purpose. Making the important distinction between popular notions and military and political realities, Gary Hess helps today's readers to better understand the complexity of the conflict.
Updated to incorporate the latest scholarship, this latest edition also includes new material to underscore more fully the moral dimensions of the war, including the American decision to use the atomic bomb, the ruthless campaigns of both the Germans and Russians in Eastern Europe, American reaction to the Holocaust as well as the government's post-war tolerance and protection of Nazis deemed valuable to Cold War research and intelligence. Enhanced coverage of specific topics including the Bataan Death March, the Battle of the Bulge, and the Allied uncovering of concentration camps rounds out the narrative.