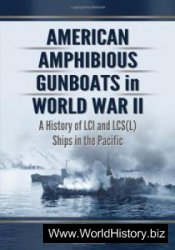 American Amphibious Gunboats in WW II
Author:Robin L. Rielly
McFarland
2013
Language:English
Format:epub
Size:65 mb
Pages:408
As the United States began its campaign against numerous Japanese-held islands in the Pacific, Japanese tactics required them to develop new weapons and strategies. One of the most crucial to the island assaults was a new group of amphibious gunboats that could deliver heavy fire close in to shore as American forces landed. These gunboats were also to prove important in the interdiction of inter-island barge traffic and, late in the war, the kamikaze threat. Several variations of these gunboats were developed, based on the troop carrying LCI(L). They included three conversions of the LCI(L), with various combinations of guns, rockets and mortars, and a fourth gunboat, the LCS(L), based on the same hull but designed as a weapons platform from the beginning. By the end of the war the amphibious gunboats had proven their worth.